The guy behind the goose 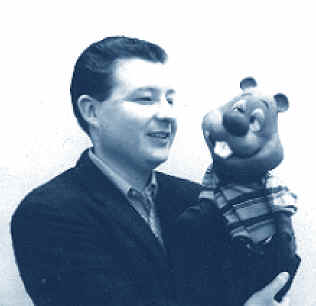 He graduated from Chicago's Austin High School and trained at the Chicago Academy Of Fine Arts interning as a cartoonist for WBKB when he began to attract the attention of  Frazier Thomas, who had recently joined WBKB from Cincinnati's WLW. Bruce Newton built the very first Garfield Goose while Brown created all the other puppets on the show including "Romberg Rabbit," the "unemployed magician's assistant" ( a sly reference to Rom's previous employer at WBBM-TV, Buddy Black, a magician who pulled "Rom" out of a hat. When that show was cancelled, Thomas suggested to Brown that he bring the character over to his show "Garfield Goose & Friends"); "Beauregard Burnside III," the sleepy secret agent bloodhound that could only be aroused by a hearty "hot dogs, hamburgers, spaghetti and meatballs!" yelled into his ear; and "Macintosh Mouse." Brown stayed behind a black shade out of camera sight watching a ten inch monitor while Thomas interacted. Brown's ability to bring life to the simple puppets is uncanny. He also voiced and pulled the strings for "Cuddly Duddly" on "Ray Rayner & Friends."

Brown later began to submit scripts and comedy sketches for "Bozo's Circus." When producer Don Sandburg (who also played the mute "Sandy," ) wanted to move on to California, he approached Brown while having an after work cocktail at their favorite Friday night watering hole. After some initial misgivings, Brown decided to create the character of Cooky, the circus cook based on a running gag between Bozo and Oliver O. Oliver about the circus food (itself a reference to the questionable culinary offerings at the WGN cafeteria).

The following Monday, Sandburg put Brown on as "Cooky" for the WGN-TV brass to see. Sandburg had dusted off some scripts used on the old "Wally Phillips Show" where Bob Bell had played a filthy chef called "Max." After cleaning it up a bit, Roy performed two of the sketches. The brass was out to lunch. The next day Roy appeared again and once more the brass was out to lunch. Sandburg just hired him for the show anyway. 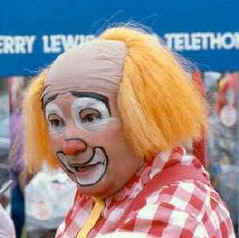 Brown, who had no previous experience on camera created the persona of "Cooky" by taking one of "Bozo's" wigs and cutting it down to size. A little known tidbit of Chicago TV lore is that in addition to Brown's many other accomplishments in Chicago television, he also made "Oliver O. Oliver's" noses.

On January 22, 2001, Roy Thomas Brown died from congestive heart failure. He was 68. His final appearance on "The Bozo Super Sunday Show" was in October of 2000.