Ask any life-long Chicagoan what was the most popular program on noontime television and they will undoubtedly say Bozo's Circus!  While this is true as far as the 1960s go, the bluish light emitting from the televisions of the 1950s presented us with a half-hour noon program hosted by a gentleman who was much loved by children and adults alike.  His name was Johnny Coons ("Uncle Johnny" to the kids) and his Noontime Comics on WNBQ-channel 5 was a hit. 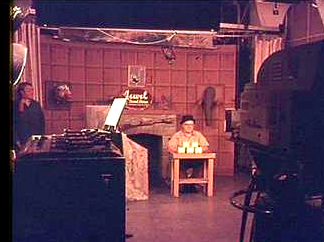 Johnny Coons joined our world on August 2, 1916 in Lebanon Indiana, the son of a doctor.  He began in Chicago radio appearing in such series as Vic and Sade and Sky King.  While still in Fort Wayne Indiana, Coons and Ray Chan produced and filmed a half hour comedy in the Hee Haw vein called Bert and Elmer that never went anywhere.  His Chicago television legacy begins in 1948 at WENR-TV-channel 7.  Many will remember the favorite Marshall Field Christmas characters of Uncle Mistletoe and his consort Aunt Holly.  Originally appearing only as window displays during the holiday season, Marshall Field decided to jump into the new television craze and build a show around the characters.  The ad agency of Foote, Cone, & Belding was given the task of putting the show together. 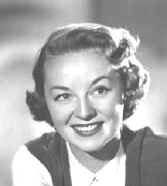 Jennifer Holt, daughter of cowboy movie star Jack Holt.  WENR-TV debuted the show in September of 1948 with an intended 13 week run.  Holt, as Aunt Holly, would open the show with Uncle Mistletoe (voiced by Coons) in a live segment.  Then the show would switch to "live" cartoons!  Using a overhead projector and two video cameras which switched back and forth, the cartoons were actually hand drawn on the air with the camera switching creating a crude animation of sorts.  Johnny Coons provided all the voices.  The show became so popular that it stayed on the air until 1952. 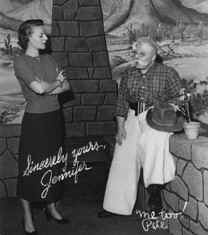 No doubt encouraged by their success, Coons, Chan, and Bill Newton formed CNC Productions.  Their first offering was a show called Panhandle Pete and Jennifer.  In this show, Coons appeared live as an old salt who spun wild yarns illustrated with cartoons.  It was not unlike the Mistletoe series.  CNC found themselves quite busy doing ten live shows a week.  Panhandle Pete and Jennifer aired weekdays at 4:30 on WNBQ-channel 5 originating from The Studebaker Theater on south Michigan avenue.  Uncle Mistletoe aired weekdays live from The Opera House on North Wacker Drive at 5:45 on WENR-TV-channel 7.

Later CNC created King Calico, a puppet show fronted by a live woman named Doris Larsen.  She introduced the episodes and did the commercials.  Coons voiced all the puppets.  It was another success for WENR-TV.  King Calico enjoyed a brief run in filmed syndication but eventually lost its sponsor and was off the air by 1953. 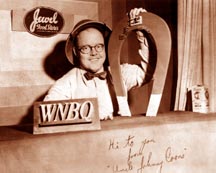 Around this time, WNBQ program director George Heineman hired CNC to produce a local live kid's show.  It would be called Noontime Comics and each day Uncle Johnny would sit, eat his lunch,  and introduce silent film comedies.  The first time they had been shown on television.  Using organ music and sound effects, Coons wisecracked throughout the film.  MST3K fans take note.  This is where it all started.  During the three commercial breaks, Coons would do stunts (limited to the small size of his "studio") and worked with whatever props they could find around the WNBQ studios.  One such prop was a dummy whose head swiveled 360 degrees.  Named George Dummy, George would always do the wrong things and get bawled out by Johnny, who would in turn urge the children to do the right thing.  The kids loved "Uncle Johnny" and always did what he asked.  CNC even made up a special four and half foot ruler to help the little viewers to sit the proper distance from the television screen.  There was one more claim to fame that belonged to Noontime Comics.  It marked the very first Chicago television exposure of Ned Locke, who substituted for Coons briefly in 1952.  During most of the show's run it was sponsored by Jewel Food Stores.

For a short time in 1956, a network version of Noontime Comics aired on Saturdays on NBC called The Uncle Johnny Coons Show.  Like Noontime, it was a half hour of silent films with Johnny doing the live wraparounds.  The major difference was now the studio was much larger allowing for more elaborate stunts and sight gags.  It aired from March 3, 1956 until the following November 24th.  Noontime Comics continued locally for awhile afterwards.  In a sad ending to a popular show, CNC had acquired financing to produce several episodes on film for future syndication.  Unfortunately before anything could be done, the cargo plane carrying the negatives to Hollywood crashed at O'Hare.

In 1957, Coons was the voice of Space Mouse on The Woody Woodpecker Show, which featured such voice icons as Mel Blanc, Daws Butler, June Foray, Paul Frees, and Hans Conried.  In 1961, Coons was the voice of Heap O'Calorie on The Dick Tracy Show, a syndicated series that appeared locally on WGN-TV-channel 9 with live segments featuring Ray Rayner and puppeteer Ron MacAdam.  In 1969, he had an uncredited role as a clerk in the western Tell Them Willie Boy Is Here.

Johnny Coons returned to Chicago in the 1970s.  He worked briefly once again with Ray Chan who used him as voice-over talent in a commercial.  Sadly in 1974, Coons found himself hospitalized for two months following brain surgery.  He had been ill for 18 months.  On July 6, 1975, at the age of 58, Johnny Coons left our world from his home at 1550 N. State Parkway.  He was survived by his wife Tasma, and sons Richard, David, and Thomas.  He was the proud grandfather of two.