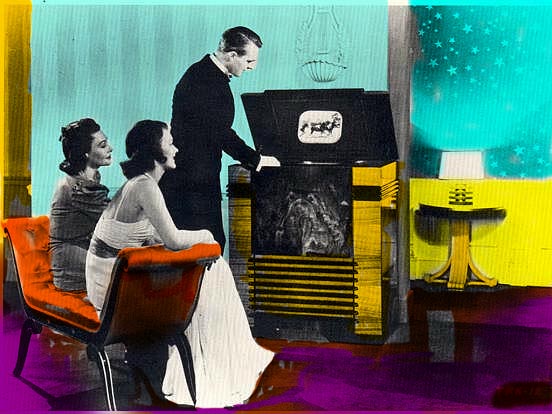 TV. We take it for granted. Big screens, color, stereo. Digital tuners capable of bringing in hundreds of stations from which, as the old joke goes...there is nothing to watch. TV, recently has gone through another metamorphosis- its conversion to digital, replacing the analog system of broadcasting introduced to Chicago in 1939.  From television's early days when developments by Philo T. Farnsworth in electronic telecasting replaced the limited mechanical systems, television has been transformed for the third time in its short existence.

And we are here, in that special place in time, where history will affect us all the rest of our lives. At the turn of the last century, we marveled at the wonders of wireless! The 19th century had introduced the telegraph and the telephone, and as the century was coming to a close, Marconi had begun to send signals via airwaves and Morse code to ships at sea. By 1906, the world's first voice broadcast came on Christmas Eve from a Canadian  by the name of Reginald Fessendenn.  Radio was born. By the 1920s, television was more than just a fantastic idea, it had become reality as amateurs built the television kits that they read about in magazines like Popular Science.

Fast forward to the 21st century. We marvel at the wonders of wireless! This time with the internet. Digital broadcasting will allow us to have more choices with less channels- 2 through 51. Satellite and cable will be there and the internet will interact with you and your TV in more ways than now.

History books on the development of television technology and programming will always undoubtedly point to New York City.  And while the Big Apple's involvement cannot and should not be ignored, it should also be acknowledged that Chicago's part was no less important or influential.  Fred Allen once said that New York's Radio City should be torn down and rebuilt here in the windy city as Television Town after he appeared (at his own expense) as a guest on WNBQ's Garroway At Large.  He was referring to "the Chicago School of Television" and its amazing talent for making so much out of so little.  WBKB (direct descendant of today's WLS-TV), the third oldest commercial station in the country, one of the few to remain on the air during World War II, and Chicago's first commercial television station scored some industry firsts such as the microwave relays linking distant stations instead of the commonly used AT&T phone lines.  And Chicago's own radio manufacturer Zenith, experimenting with the concept of pay television as early as 1931, conducted the first pay television broadcasts in 1951.

So as we enter a new era in communication, information and entertainment, so must we look back at where it all began and the people and organizations responsible for it. THE VIDEO VETERAN will be undergoing constant changes and additions to bring you this history as it affected Chicago.